Australian Cave Animal of the Year

Cave Animal of the Year was launched in January 2019 and aims to raise the profile of cave animals in the community and draw attention to the importance of caves as important animal habitat. The inaugural Australian Cave Animal of the year is the Tasmanian cave spider Hickmania troglodytes.

The program is inspired by the German Cave Animal of the Year program, which was launched in 2008 and is now in its 12th year.
There is no popular competition to select the ‘winner’. The Tasmanian cave spider was selected as our debut cave animal to coincide with the international success of the film Sixteen Legs. The intention is to have a range of cave animals from around Australia and the selected animal will be a ‘flagship’ for other cave animals.

The 2022 Australian Cave Animal of the year is the Ghost Bat Macroderma gigas. 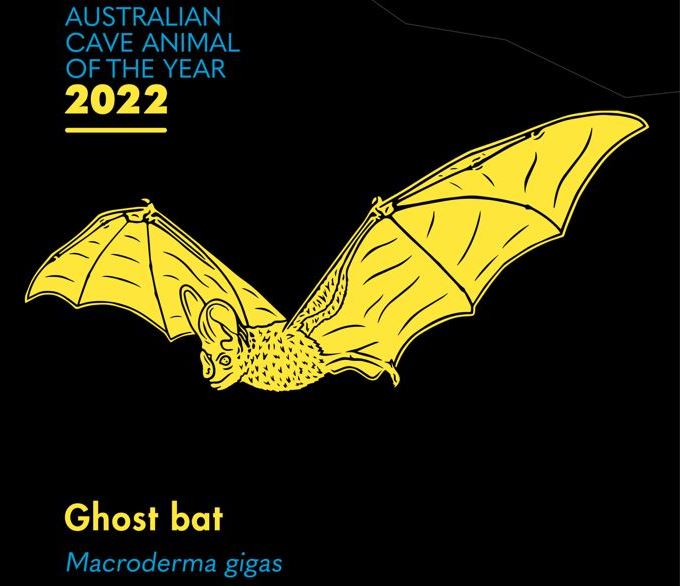 Some beautiful Cave Animal of the Year promotional products have been produced:

Thanks to the Karst Conservation Fund for financial support, to the German Speleological Federation for their inspiration, to the International Union of Speleology for funding the stickers and to Poco People and Aeski in Hobart for their exciting art and design work.

Honeycomb Cave Entrance Stabilization Project (2014) and stairway replacement at the lower entrance of Kubla Khan Cave. Members of Karstcare provided assistance with these works. Both of these sites are in Mole Creek National Park. This project was recently completed (September 2014). Report to appear soon. For more information download the report

Mt Etna Ghost Bat Genetics Research on the Mt Etna ghost population is nearly complete. This has revealed the 2012-3 population was about 30 individual bats, which was substantiated by models based on the restricted genetic base revealed fro the laboratory genetic studies. The Mt Etna population does not interbreed with other populations of the ghost bat in Queensland. This low population is unsustainable. The population has seriously declined in numbers since quarrying destroyed a cave used for over-wintering. Various strategies are being considered to ensure the population's survival.

Scrubby Creek Cave Property Acquisition, at Murrindal, Victoria. The Fund supported the acquisition of this property by Rimstone Cooperative Ltd. Targeted donations amounted to over $90,000. This project is coming to its conclusion at present with residual funds to be used to quit personal loans for the purchase, to protect the tufa terraces where Scrubby Creek emerges from the cave and to prepare a Management Plan for the continued protection of the cave and the property.

Wombeyan (Melocco) Quarry Project This project is preparing 3D maps of the Melocco quarry for us preparing educational materials for this historic industrial site.